This is the first lesson in a series of four, it is designed for the absolute beginner. If you have never written a line of code before and the words variables, callbacks, data-types, functions, and loops mean nothing to you then this is the lesson for you.

In this first lesson of David Healey’s Kontakt scripting tutorials you will be introduced to the wonderful world of computer programming and writing scripts for the Native Instrument’s Kontakt sampler.

Each lesson in the series is standalone, although there is a little bit of overlap. You don’t need to have seen any of the others to be able to follow along. As you progress from lesson one to four it is expected that your base level of Kontakt scripting knowledge and ability is higher.

In this lesson it is expected that you have a reasonable understanding of MIDI and that you are able to set up Kontakt and load sample libraries.

The Journey of a Thousand Lines…

During more than four hours of video you will not only learn how to create Kontakt scripts from the ground up you’ll discover the basic principles that apply to many programming languages.

These essential skills will get you up and running with your own Kontakt projects in no time and provide you with a good foundation of general programming practises and techniques. Having a thorough understanding of the fundamentals will aid you greatly with your Kontakt scripting and any other programming or scripting languages you explore in the future.

In this lesson David will walk you through the process of creating a percussion instrument. To do this you’ll make use of the included drum kit samples courtesy of Nicholas Signat’s Alive Underground Drums.

The structure of the lesson is an introduction to a topic followed by a demonstration of how it can be used in practise, and then you will use the various topics discussed to build a virtual instrument. The end result is a playable drum kit that includes multiple dynamic layers, round robin repetitions, a note readout, release triggers, and a cymbal choke system.  You’ll also make it look nice by adding a wallpaper image to the interface.

The topics covered in this lesson include studying the basic building blocks of a Kontakt script (callbacks), understanding how to store and recall values (variables and arrays), performing simple calculations (operators), leveraging programmable logic to do your bidding (control statements), and much more!

The download package for lesson one includes 11 tutorial videos, one special feature video discussing the Alive Underground Drums sample library (also available on YouTube), the wallpaper image used in the tutorial instrument in both PNG and PSD format, and 30 audio samples.

8) Functions
– Introduction to functions
– The structure of a function

Only logged in customers who have purchased this product may leave a review. 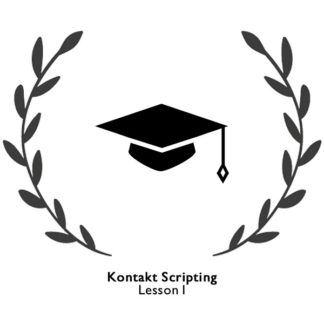